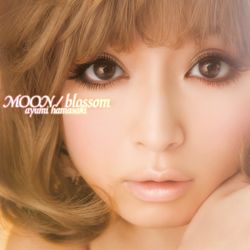 "MOON" is a pop song recorded by Hamasaki Ayumi. The song is found on "MOON / blossom" single as track #1 and on Love songs album as track #3. It was used as Honda Zest Spark CM theme song. It was certified Gold by RIAJ for more than 100,000 cellphone ringtone downloads.

The music video for "MOON" was directed by Masashi Muto.

The video featured Hamasaki singing in a European aristocratic room setting. As the video progresses a strange, black, tar-like liquid begins dropping in the room, on random furniture. The video is also inter-cut with scenes of her smiling while holding one of her pet dogs.