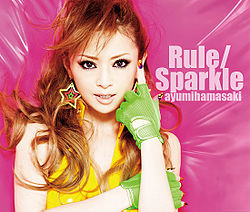 "Rule" is a song recorded by Hamasaki Ayumi, first released as an A-side on her single "Rule / Sparkle". The song is described as a fast paced rock song, and was used as the international theme song for the movie Dragonball Evolution.

The PV for "Rule" was directed by Ishii Takahide. The video features a ninja theme with some Dragonball references.

There are five versions of "Rule" to be found in Hamasaki Ayumi's discography. These are: