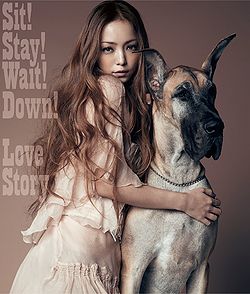 "Sit! Stay! Wait! Down!" is a Urban-pop dance song recorded by Amuro Namie, and produced by MICHICO and T-KURA for GIANT SWING PRODUCTIONS. It is first found on Amuro's 36th single (eighth Double A-side) "Sit! Stay! Wait! Down! / Love Story", and was later placed on her ninth studio album Uncontrolled in 2012. Despite it being an A-side, "Sit! Stay! Wait! Down!" did not receive a music video. This track is Amuro's final production with longtime collaborators MICHICO and T-KURA for GIANT SWING PRODUCTIONS; MICHICO first wrote Japanese lyrics on STYLE and the duo went on to become some of her main songwriters for her last three studio records.

The single's production was split with the Australian Electronic dance musicians Nervo who contributed "Love Story" , and this was Amuro's first time working with them. The song was released at a time when Amuro was in the process of transition her career and changing her sound. After working with artists such as Nervo, Amuro would shed her Urban compemporary sound after this record and made the move to Electronic dance music.

The song did well on the music and download charts. It reached #3 on Billboard Japan's Hot 100, #16 on Japan Airplay Chart, and peaked at #1 on RIAJ Digital Track Chart.[1] "Sit! Stay! Wait! Down!" was certified Platinum by Recording Industry Association of Japan for over 250,000 digital downloads.