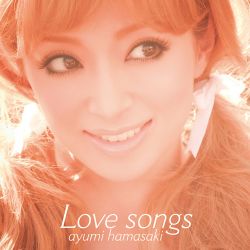 "Love song" is a pop song recorded by Hamasaki Ayumi. The song is found on her twelth studio album Love songs as track #1. In February 2011 it was certified gold for over 100,000 full-length cellphone downloads.

The music video for "Love song" was directed by Muto Masashi and was filmed in California. It features model Manuel Schwarz.

It shows Hamasaki leaving Schwarz after a couple's fight. He runs after her but she ignores him. At the end of the music video, while wandering through the streets, she remembers the events that led to the "Last angel" music video.

The following are the different versions of "M" released throughout Hamasaki Ayumi's discography, listed chronologically.