The Meaning of Peace 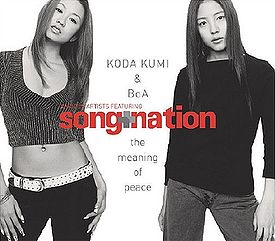 "the meaning of peace" is collaboration between Koda Kumi and BoA for the songnation project, which was created to raise funds to help after the 9/11 tragedy. This single is one of three singles, the others being "a song is born" by Hamasaki Ayumi & Keiko, and "lovin' it" by Amuro Namie & VERBAL. All three were part of the album VARIOUS ARTISTS FEATURING song+nation. This single reached #12 on the Oricon charts and charted for 7 weeks, selling 66,840 copies.

There are seven versions of "the meaning of peace". These different versions are: