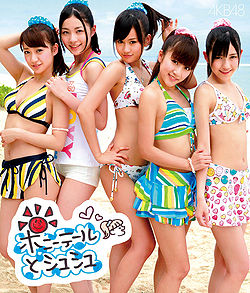 "Nusumareta Kuchibiru" is a song recorded by AKB48, sung by Under Girls. It appears on the single "Ponytail to Chouchou" as track #2.

There are currently two versions of "Nusumareta Kuchibiru" to be found in AKB48's discography. These versions are: