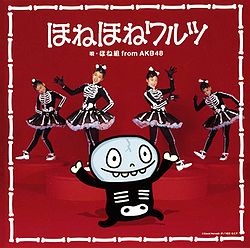 "Honehone Waltz" is the debut single released by Honegumi from AKB48. The title track was used as a theme song for the NHK children's television program Karada de Asobo.

In addition to the single release, "Honehone Waltz" is a song performed in the AKB48 stage "Nounai Paradise", which was originated by Team K. It is a unit number performed in the following stages:

There are currently five versions of "Honehone Waltz" to be found in AKB48's discography. These versions are: